For a better understanding of the common kinship of Muslim and Hindu Kashmiris a brief introduction to the history of the region is important. According to Mahabharata, the Kambojas had ruled over Kashmir during epic times and it was a Republican government under the Kamboj. The capital city of Kashmir during these times was Rajapura i.e Karna-Rajapuram-gatva-Kambojah-nirjitastava. Rajapura has been identified with modern Rajauri. The Panchalas established their sway. Panjal is a distorted form of the Sanskritic tribal term Panchala. The Muslims prefixed the word “peer” to it in memory of one Siddha Faqir, thus naming the city Peer Panjal. 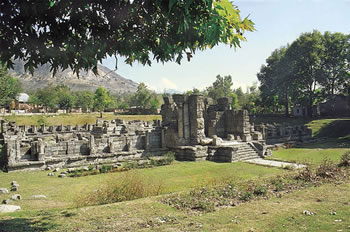 The Mauryan emperor Ashoka is credited with having founded the city of Srinagar. Kashmir was once a Buddhist seat of learning, perhaps with the Sarvastivadan school dominating. East and Central Asian Buddhist monks are recorded as having visited the kingdom. In the late 4th century AD, the famous Kuchanese monk Kumarajiva, born to an Indian noble family, studied Dirghagama and Madhyagama in Kashmir under Bandhudatta. He become a prolific translator who helped take Buddhism to China. His mother, Jiva, retired to Kashmir. Vimalak?a, a Sarvastivadan Buddhist monk, travelled from Kashmir to Kucha and there instructed Kumarajiva in the Vinayapi?aka.

In the 13th century, Islam became the dominant religion in Kashmir. The Muslims and Hindus of Kashmir lived in harmony, since the Sufi-Islamic way of life that ordinary Muslims followed in Kashmir complemented the Rishi tradition of Kashmiri Pandits. This led to a syncretic culture where Hindus and Muslims revered the same local saints and prayed at the same shrines. The Sufi saint Bulbul Shah persuaded King Rinchan Shah, ruler ofof Kashgar Ladakh, to adopt Islamic way of life. The foundation of Sufiana composite culture was laid when Muslims, Hindus and Buddhists were co-existing in the atmosphere of love and brotherhood.

The metrical chronicle of the kings of Kashmir, called Rajatarangini, has been pronounced by Professor H.I.Wilson to be the only Sanskrit composition yet discovered to which the appellation “history” can be applied. It first became known to the Muslims when, on Akbar’s invasion of Kashmir in 1588, a copy was presented to the emperor. A translation into Persian was made at his order. A summary of its contents, taken from this Persian translation, is given by Abul Fazl in the Ain-i-Akbari. The Rajatarangini was written by Kalhana about the middle of the 12th century. His work, in six books, makes use of earlier writings that are now lost.

The Rajatarangini is the first of a series of four histories that record the annals of Kashmir. Commencing with a rendition of traditional history of very early times, the Rajatarangini comes down to the reign of Sangrama Deva, (c.1006 AD). The second work, by Jonaraja, continues the history from where Kalhana left off, and, entering the Muslim period, gives an account of the reigns down to that of Zain-ul-ab-ad-din, 1412. P. Srivara carried on the record to the accession of Fah Shah in 1486. The fourth work, called Rajavalipataka, by Prajnia Bhatta, completes the history to the time of the incorporation of Kashmir in the dominions of the Mogul emperor Akbar, 1588.

At present some of the famous Temples in Kashmir are:-

The antiquity of Shankaracharya temple is akin to that of Vaishno Devi in Jammu. The temple, dedicated to Lord Shiva, has legends dating back to 200 BC. Built to overlook the valley, situated atop the Hill it has the devout climb the hill with offerings in their hands, a motorable road has been built leading to the TV Tower on the hill. The sacred temple is situated to the south east of Srinagar. However, neither the hill nor the temple retain their pre-historic names, Gopadari and Jyeshtheswara respectively. The temple is built on a high octagonal plinth approached by a flight of steps.

Hari Parbat Fort: To the west of the Dal lies the Hari Parbat Hill, sacred to the Goddess Sharika in whose honour a temple has been consecrated on the western slopes of the hill. Further up, on the crest of the hill is Hari Parhat Fort which dates to the 18th century.

History records that the first pilglimage to Amarnath was undertaken in 1000 BC, though little else is known of the antiquity of Amarnath. Located 141 km from Srinagar, of which 45 km from Pahalgam has to be trekked, Amarnath is believed to be the holiest of Hindu shrines.

The Amarnath yatra is undertaken in July-August (Shravan) and thousdads of devotees walk, some on ponyback, to pay obeisance at the cave where an ice-lingam, that of Shiva, waxes and wanes with the moon. By its side are two other ice lingams, those of Parvati, and their son, Ganesha.

Goddess Ragnya Devi is worshipped here, symbolised by a sacred spring at Tula Mula village, 27 km from Srinagar. In the centre of the spring is a small marble temple and the Hindu inhabitants of Srinagar fast and converge at the spot on the eighth day of the full moon in the month of May when legend has it, the goddess changes the color of the waters.

Opposite the Rest House at Pahalgam, on the right bank of river Lidder is a small temple, now in ruins, dedicated to Lord Shiva. The temple had an eight square feet interior with a porch supported by two fluted columns, one of which has now weathered away. In fact, the suprastructure is no longer there and even the ceiling no longer exists. Inside the sanctum is a Shiva lingam.

A village by this name is a bare three miles above Srinagar. It has a well-preserved temple behind the willow grove on the left hand side of the cart road. The ceiling of the shrine is rated as the best example of carving on stone in the entire valley. Though ascribed to Vishnu or Shiva, the seven square feet ‘depression’ in the centre carries no deity, only carved ‘yakshas’. 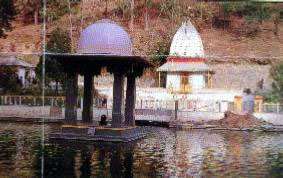 It is located on the top of a plateau, a bare five miles from the town of Anantnag. The temple is dedicated to Surya, the Hindu Sun God. It is a medieval temple with a courtyard, colonnaded and with the shrine in the centre. It has 84 – a sacred Hindu digit – columns and affords a commanding view of the valley.

Only 64 km from Srinagar is Achhabal, the abode of peace, a powerful stream embellished, in the 17th century, by Shah Jehan with gardens and baths. The spring waters run into three channels over terraces where chinar trees stand vigil. Short of Acchabal is Anantnag, 54 km, the infinite spring surrounded by a flower garden, linked with Hindu mythological god Indra. At Mattan, 61.5 km from Srinagar, are famous temples where sacred ceremonies are held to propitiate the dead.

Chatti Padshahi, one of the most important Sikh Gurudwaras in Kashmir is situated just outside the southern gate of the fort.

On request tour of the places can be easily arranged.