Jammu is one of the 3 regions comprised by india’s north most state of Jammu & Kashmir.

Also called as the City of Temples, Jammu borders Kashmir, the disputed part of the state, to the north, Ladakh to the east, and Himachal Pradesh to the south. Sandwiched between the Vale of Kashmir to the north and the Daman Koh Plains to the south, the Shivalik Range comprises most of the region of Jammu. The Pir Panjal Range, the Trikuta Hills and the low-lying Tawi River basin add beauty and diversity to the terrain of Jammu.

Jammu, also known as “City of Temples”, has innumerable temples and shrines, with glittering ‘shikhars’ soaring into the sky, dot the city’s skyline, creating the ambience of a holy and peaceful city.

Home to some of the most popular Hindu shrines, such as Vaishno Devi, Jammu is one of the most famous pilgrimage tourism destinations in India. Once a seat of the Dogra Rajput dynasty, Jammu came under the control of Maharaja Ranjit Singh Ji in the 19 century and became a part of the Sikh Empire. Maharaja Ranjit Singh soon appointed Gulab Singh Ji the ruler of Jammu. After the death of Maharaja Ranjit Singh, Punjab, The Sikh Empire was defeated by the British after Maharaja Duleep Singh was taken by the British to England under the orders of The Company. Not having the resources to occupy the hills immediately after annexing parts of Punjab, the British recognized Maharaja Gulab Singh, the strongest ruler north of the Sutlej River, as ruler of Jammu and Kashmir. But for this he had to pay a sum of Rs. 75 Lakhs in cash—this payment being legal as the Maharaja was a former vassal of the Sikh Empire and was partly responsible for its treaty obligations. Maharaja Gulab Singh is thus credited as the founder of Jammu and Kashmir. 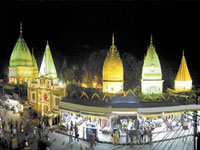 Amongst the temples in Jammu, the Raghunath Mandir takes pride of place being situated right in the heart of the city.

It consists of a cluster of temples and is the largest temple complex in northern India. Its inner sanctums contain gigantic statues of deities and numerous ‘lingams’. It contains representatives of almost the entire Hindu pantheon, which make it a rare site to behold.

The famous temple of Bawey Wali Mata is inside the Bahu Fort where, every Tuesday and Sunday, pilgrims throng to worship the goddess.

A little further away, on a spur opposite the Bahu Fort, overlooking the river Tawi, stands a temple dedicated to Mahamaya, a Dogra heroine who lost her life fourteen centuries ago fighting foreign invaders.

The Peer Kho cave temple overlooking the Tawi river, the Panchbakhtar temple and the Ranbireshwar temple are the other well known Shiva temples in Jammu.

Each has its own legend, its devotees and specific days of worship. In Ranbireshwar Temple, there are twelve Shiva ‘lingams’ of crystal measuring 12″ to 18″ and galleries with thousands of ‘saligrams’ fixed on stone slabs. Other important temples in Jammu are the Lakshmi Narayan temple, Duda Dhari temple and the Panj Mandir in Gandhi Nagar.

It is said that if the Bawey Wali Mata is the presiding deity of Jammu, the ‘durgah’ of Peer Budhan Ali Shah or Peer Baba as it is known, is the shrine that protects the people of this city from mishaps and evil spirits.

A friend of Guru Gobind Singh, Peer Baba is said to have lived his entire life on milk alone and lived to the age of five hundred. On Thursdays, Hindu and Sikh devotees vastly outnumber their Muslim brethren at this shrine; such is the faith of the people in Peer Baba. Most VIPs make it a point to visit this ‘durgah’ when they come to Jammu.

Peer Mitha is another famous Muslim shrine in Jammu. Peer Mitha was a contemporary of Ajaib Dev and

Ghareeb Nath – both saints were famous for their prophecies and miracles. ‘Mitha’ means ‘the sweet one’, for the Peer would accept nothing more than a pinch of sugar in offering from his devotees. 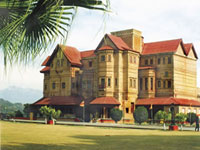 On the opposite bank of the Tawi river, on an upland plateau, is situated the majestic Bahu Fort, the oldest edifice extant in the region. Looking at this fort one can imagine the wars fought, invasions prevented, and yes, even the grandeur the royal family must have enjoyed at the time. Today it is surrounded by a lush green terraced garden, with waterfalls and flowers of just about every kind and colour. It is a favourite picnic spot for the city folk.

The Amar Mahal Palace, a sight to behold, is on an eyrie overlooking the Tawi river. This grand palace, with sloping roofs and tall towers, so characteristic of continental castles, reminds one of France. The palace has been converted into a museum which also houses the city’s finest library of antique books and paintings. An entire series of miniatures on the epic Nal-Damayanti can be seen in the museum.

On request tour of the places can be easily arranged.